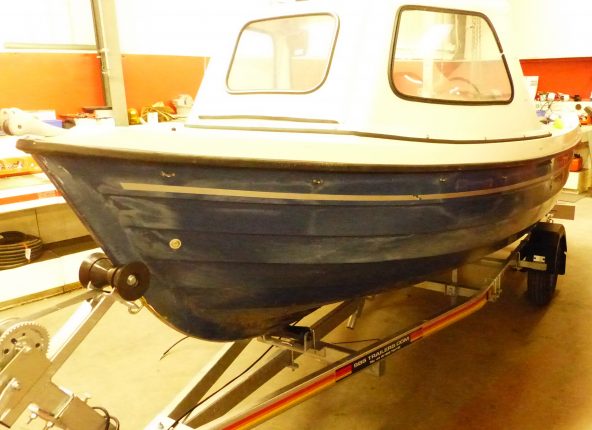 I just bought in a Orkney 440 with a Yamaha 25hp electric start outboard on it.
Its going to get treated to a make over so you can see it before during and after.I will run through how I get on.
It was a trade sale for the boat and engine which was sold as seen without anyway to test the engine.
DO NOT ever do this as a private buyer you must see an outboard running and if possible under load on the water for at least 20 minutes.Running with muffs on is one thing but faults show themselves in a test tank or loch under load. 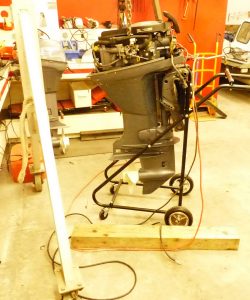 THE ENGINE – I bought the boat with the intention of replacing the engine and using the 25hp Yamaha on something else.Its 5hp oversized for the boat but the main issue is the weight.
Five bags of sand were found in the bow of the boat to keep it down and counter balance the engines weight and extra horse power.
The extra bow and engine weight makes it unstable under power and likely to cause damage to the transom especially when trailering it about.
Your insurance would most likely also not pay out in the event of a any claim.

It was described as a cracking engine and on visual inspection it seemed OK with a new set of plugs in it.
The battery was only 40amph and partly flat showing 8V so not really enough reserve of juice to turn it over.
I hooked up a 75amp new battery and tried it but just got a very slow turnover speed.
Went to the starter motor found a loose + wire and tightened it up.
Gave the starter motor a spray with WD40 which also helped turnover speed.
I had it on a set of muffs on so I squeezed the fuel primer bulb which fell apart in my hand.
I poured the fuel out the tank into a white clean bowl.
It was bright yellow full of all sorts of rubbish and was 50% water.
The engine had clearly not run at all for some time.
I took the carb off and using a fresh line and tank pumped the bulb while holding the carb feed petrol pipe over a bowl.
Once this had ran clear I knew the old fuel was out the system.
Next I stripped the carb and found the jets blocked and blew them out with an airline.
Once back together I primed the fuel system and tried again.
It went first flick of the key with good tell tale water pressure.
At least I hadn’t bought a lemon just a badly maintained engine.
I removed it using a overhead winch due to the weight.It was well secured via 4 12mm stainless steel bolts with spread washers and nyloc nuts.
The steering cable was seized almost solid while still attached to the engine and not much better when it was removed.There was no plastic cap on the port end of the tilt tube.These have a rubber washer in and when fitted help keep water out the cable and tilt tube.
I see no point in spending hours freeing the cable off when a new one will last years.Its probably bent as well as poorly lubricated. 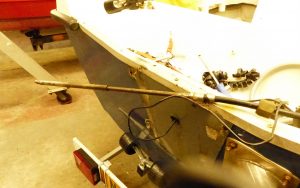 The control box came off easily although one screw had seized through corrosion. The stainless steel screw had welded itself to the alloy case of the box.I forced it off the side of the boat using a large screwdriver and will tap it out from behind after it soaked in oil for a while.
I pulled the battery cables out from behind the gunnels as the battery was located in the bow again to counteract the engine weight.
You won’t ever guess how long they were bearing in mind its a 14ft boat.
Yes 17ft in length.
No wonder the little 40amp hour battery couldn’t cope with that extra resistance caused by the unneeded cable length.
The battery will be put back in the rear locker in a battery box on shorter cables. 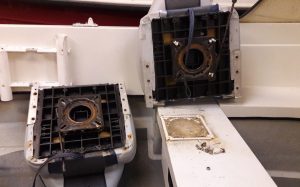 I checked the seats and although in good condition the swivel bases wouldn’t turn they were rusted solid.The saving grace was the swivel bases were bolted onto the fibreglass bench with stainless nuts and bolts so came off easily.
The bolts holding the bases to the seats however were rusted but came off.
One needed to have a slot cut in the head to get a better grip on it. 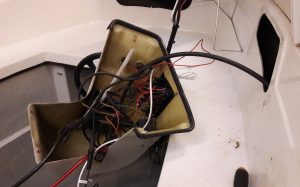 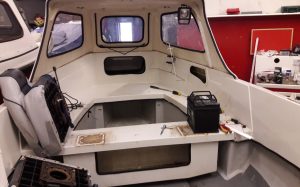 The centre console was held on using 6 screws, 4 of which have a plastic wing nut to screw into.Once off I was able to remove the 12’steering cable and look at the wiring.
The horn button, cigarette lighter socket and fuse panel were all rusted and were removed from the console.The helm wheel and fish finder were OK and will be re-used.
I then looked at the cuddy and found the horn,interior cabin light,nav light and VHF ariel to be all useless either due to rust or UV damage.The plastic nav light just crumbled when i went to twist the clear lens off to look inside.
These will all be thrown away.
The only thing that works is the deck light..! 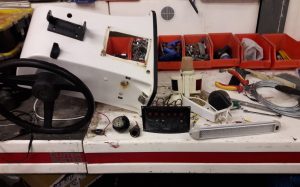 Now the cuddys off I will be able to flip the boat over to clean the underneath.
Will do this using two lifting gantries I have in the unit. 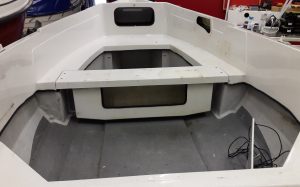 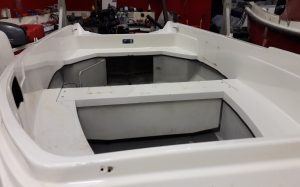 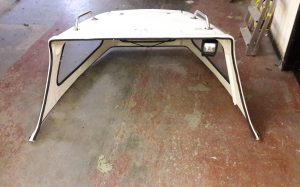